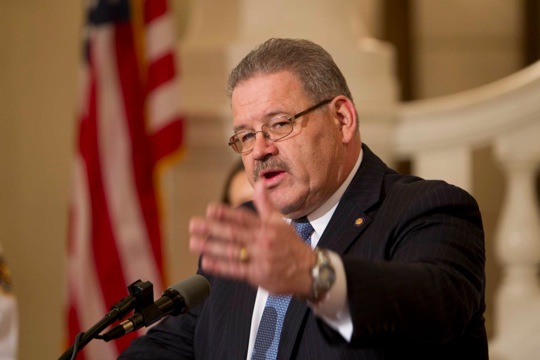 Senate Bill 391 would allow those convicted of certain misdemeanors of the second and third degree to apply to have the record expunged if they keep a clean record for seven years and 10 years, respectively.

Senate Bill 391 would allow individuals who were convicted of certain misdemeanors of the second and third degree to apply to have the record expunged if they keep a clean record for seven years and 10 years, respectively.

“Society isn’t helped by being stubbornly strict with lawbreakers who have paid their debt,” Solobay said. “If we want them to become productive members of society, we have to remove the stigma by clearing the record when appropriate.  This will keep them out of prison and everybody wins.”

Pennsylvania’s prison population has jumped from just more than 8,000 to more than 51,000 in the past 20 years, and costs have risen 37 percent in the past 10 years.

Experts have testified before Senate committees that part of the problem is recidivism, exacerbated by a convict’s difficulty finding a job.

Last year’s sentencing reforms have allowed prison officials to begin to plan for lower populations, but more can be done, Solobay, D-Canonsburg, said.

“There are good jobs out there and anyone who wants to work hard and turn over a new leaf should be able to,” Solobay said. “Right now, someone with a minor criminal record long in the past has almost no chance. The next step could be back to prison where taxpayers foot the bill of almost $90 a night.”

Senate Bill 391 is similar to Senate Bill 1220 of the 2011-2012 session, which cleared the Senate Judiciary Committee unanimously, but never received a floor vote.

The bill allows courts to grant expungement of a criminal record if the crime is a misdemeanor of the third or second degree and the individual has not been arrested or prosecuted for seven to ten years following the completion of the sentence or judicial supervision.

It would not apply to offenses punishable by more than one year in prison or pertaining to certain forms of assault, sex offense, cruelty to animals, firearms offenses, and certain other crimes.

Under current law, the crimes could not be expunged until after the offender reaches the age of 70, or had been deceased for more than three years.